Success! Your request has been sent and a representative will be in contact soon.

Cairns is being dubbed the homeless capital of Australia after a recent demographic study revealed 1.6% of the Far North Queensland city’s population are without a home—the highest proportion of Australia’s 18 major cities. Recently released data suggests more than 2,300 people are sleeping in the city’s streets, overcrowded dwellings and other temporary accommodation. And as if that’s not alarming enough, this figure is on the rise.

Local GP, Dr Sharmila Biswas is familiar with the homelessness epidemic reportedly taking over in the city she has called home for 20 years. “It is a very, very complex social challenge”, says Sharmila. “Homelessness is not just about being without a secure house or shelter, it’s an extreme form of social disadvantage and moreover, social exclusion. The impact is not only felt by the individual, but the community as a whole. Sometimes at the Gateway to the Great Barrier Reef—a popular holiday destination—their presence is seen as a terrible hindrance”.

For those forced to sleep on the city’s streets, survival is knowing where to get a feed or a cold or hot drink, a blanket or a bed, or the savvy to avoid the dangers that surround them out in the open with no shelter or protection. There is no doubt in Sharmila’s mind that without the presence of Rosies’ outreach van in Cairns, many of the homeless wouldn’t survive. “Neglected and disadvantaged children would have no food, youth unable to connect with their families would have no-one to talk to, and women who are victims of alcohol and domestic violence would have nowhere to go. Young and old socially isolated men, the Indigenous peoples far from their homelands, and anyone in need of medical attention exacerbated by hunger would continue to suffer”, she says.

Having recently spent time out in the van with the street outreach volunteers, Sharmila witnessed first-hand the increasing number of people who are relying on their support, not only for basic needs such as food, but also to feel some connection with the community around them. “The outreach program has been operating in Cairns for the past 24 years and the present vehicle is over 20 years old”, Sharmila explains. “It has extensive rust and has been deemed not mechanically safe. A reliable and serviceable vehicle is vital to the program and without a replacement van, those who are most vulnerable in our community will have no access to food, drink, emergency clothing, and blankets”.  A new, fully fitted out van costs a massive $50,000.

“Some of my patients that I have seen over the years have been patrons of the local outreach van making up just a few of the 120 or so homeless people they connect with each week. I’m told these numbers have been steadily increasing over the past 18 months, and a new and larger van would not only enable the program to continue but also allow it to grow. It would be able to carry more volunteers and amenities safely”.

Sharmila desperately needs your help to raise $50,000 for a new van for the Rosies' Cairns street outreach program. Donate today or before 30 June and take advantage of tax deductibility status while helping to provide basic needs and vital services to those most vulnerable in our community. 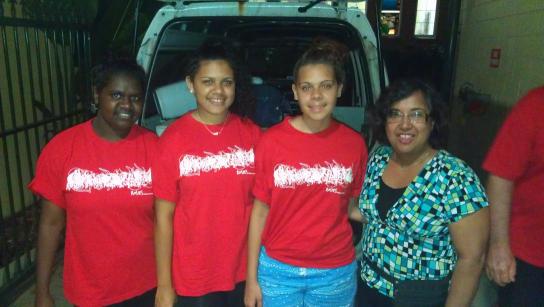